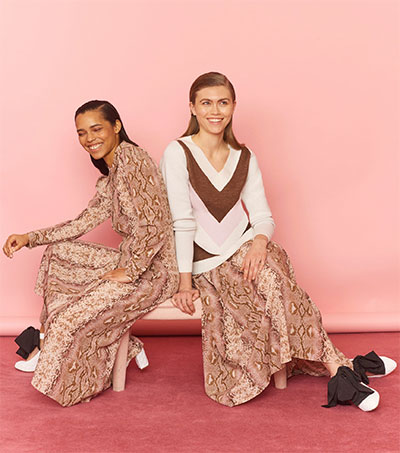 “One thing to say about [New Zealander] Emilia Wickstead: She’s one of those London designers who’s become a modern ‘social success’ with her fit-and-flare midis, long sleeves, and talent for colour which chimes the right diplomatic note – noticeable, though never shouty – at a certain class of reception,” Sarah Mower writes for a Vogue piece reviewing the designer’s Pre-Fall 2018 collection.

“These things come in waves in British society, and now that Meghan Markle is about to join the royal firm, things are about to get a lot busier, and let’s hope not too competitive, for designers like Wickstead, who already have the Duchess of Cambridge amongst their clients.

“Wickstead is prime amongst those who dress Kate Middleton. At her classily modern store, wrapped around a corner on Sloane Street, plumb in the centre of the eternal zone for royally-patronised fashion shops, the task now falls to Wickstead: How to steer through etiquette and the ‘appropriate’ to end up with something that’s not boring?

“Wickstead’s Pre-Fall collection, nominally inspired by Little Edie Beale (her early years as a model and would-be starlet in the 1940s) shows the designer’s ability to stay within defined lines while offering something new. Rather than being a Grey Gardens collection, it is instead destinationwear for those who just might be joining a dynasty, or otherwise need to execute formal social duties.

“Presumably, the Duchess will be back to her public duties after the birth of her third child next year. But it’s Markle who’ll really be in need of a royal protocol-proof wardrobe, as she takes on the planned tour of the Commonwealth with Prince Harry after they marry. Perhaps she’ll look here.”