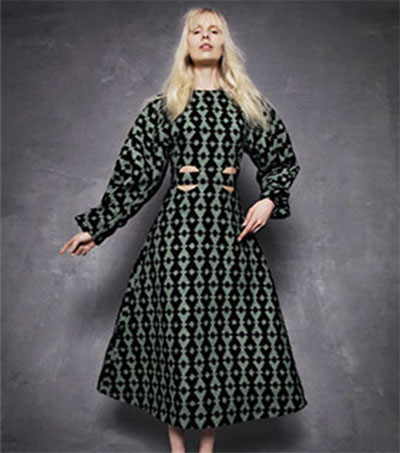 Fashion & Freedom tells the story of women and war through contemporary eyes: six female designers, also including Vivienne Westwood and Roksanda Ilincic, have created looks informed by this period of change. Their designs will be displayed alongside pieces from the gallery’s archive, works by fashion students and films by Luke Snellin and SHOWstudio. It’s part of the First World War centennial arts programme, “14-18 NOW”, which is also responsible for the UK-wide tour of the Tower of London poppy sculptures.

“It was a huge learning curve,” says Wickstead, who admits she knew little about the history before becoming involved. Her eye quickly focused on the Dazzle ships – the wartime vessels whose Cubist patterns camouflaged them from potential attackers.

“I had pictures of them all over my studio walls,” Wickstead says. “They’re so modern-looking.” The ship’s graphics gave rise to a voluminous-sleeved khaki dress whose geometric print, for Wickstead, represents women’s postwar visibility. “They no longer had to feel concealed,” she says.

“The cut-outs symbolise breaking the mould, pointing to the fact women were more able to do and wear what they wanted. As a working woman who wears the trousers when it comes to business, I embody that.”