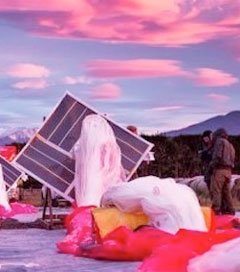 Early Adopters of Technology Perfect to Test On

When Google chose New Zealand to unveil secret plans for balloon-driven wi-fi network, dubbed Project Loon, it cemented the country’s reputation as a test bed for global tech companies looking to trial their latest innovations, industry experts say. They said New Zealand, tucked away deep in the southern hemisphere, offers a tech-savvy, English-speaking population where firms such as Google and Facebook can quietly test new products without risking major fallout if anything goes wrong. “We tend to be early adopters, any technology that reduces the tyranny of distance we’re keen on,” said Malcolm Fraser, chief executive of the Auckland-based Future Cities Institute, who has researched the trend. “We’re a small market, which means it doesn’t cost that much to test something here and if anything screws up we’re far enough from major markets for it not to have a spillover effect,” Fraser said. Facebook has enthusiastically used New Zealanders as guinea pigs, last year trialling a scheme where users can pay to make their posts more prominent on friends’ newsfeeds. It also rolled out its timeline feature first in New Zealand in 2011, saying at the time: “As a global company, we need to gain perspective and insights from outside the US. “New Zealand is a good place to start because it’s English speaking, so we can read the feedback and make improvements quickly.” This latest Google foray into New Zealand is perhaps the most ambitious high-tech test carried out in the country, aiming to bring Internet to the two-thirds of the global population currently without web access. The first person to access the web under the scheme was dairy farmer Charles Nimmo, who said he appreciated the chance to work with one of the world’s largest companies to push the frontiers of technology. “It’s been weird,” he told The New Zealand Herald. “But it’s been exciting to be part of something new.”