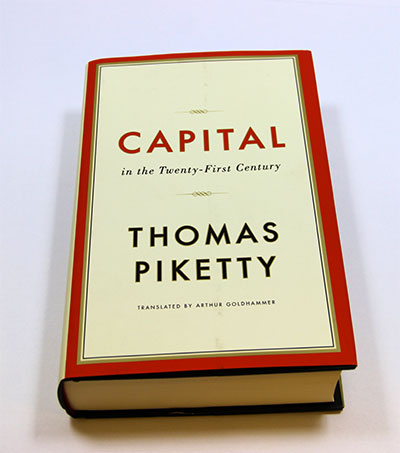 New Zealanders Matthew Metcalfe and Justin Pemberton have acquired the film rights to French economist Thomas Piketty’s 2013 global bestseller Capital in the Twenty-First Century. In Cannes, the pair unveiled their plans for the documentary, with the participation – and appearance – of Piketty himself.

Piketty’s Capital in the Twenty-First Century is many things: a cultural lightning rod, an academic game-changer, but what it has not been seen as, at least so far, is a potential movie.

“My first reaction was a little skeptical too,” said Piketty, as he sat in a suite for the New Zealand Film Commission at the festival, anticipating some reader reaction. “I thought, ‘Would this just be a series of interviews with economists?’ But Matthew really convinced me this could be done in a visual manner. And I thought, ‘If it helps people buy the book – or finish the book – then it was a good thing.’”

At its most basic, Piketty’s book laid out a novel argument for why wealth inequality was built into the modern capitalist system – basically, that it was the result of the return of capital dwarfing economic growth. It then proposed a set of taxes that could correct those imbalances and stave off all kinds of potential turmoil, while acknowledging the political difficulties of the task.

Several years ago, Metcalfe was one of many people who was simply a fan of Capital. But the producer, who had made such movies as the Everest documentary Beyond the Edge, began to think of ways it could become a movie. He contacted Piketty via his website and then spent the next few months convincing him and his French publisher this was a worthy undertaking.

Key to his pitch were those visual aspects. He, and later Pemberton, believed that the movie could work if the talking heads were minimised and other, more pop culture friendly portrayals used in their place.

“This is a way for a lot more people to understand its ideas.” Math, he said, would be kept to a minimum.

Added the director: “It’s a challenge, but an exciting challenge.”