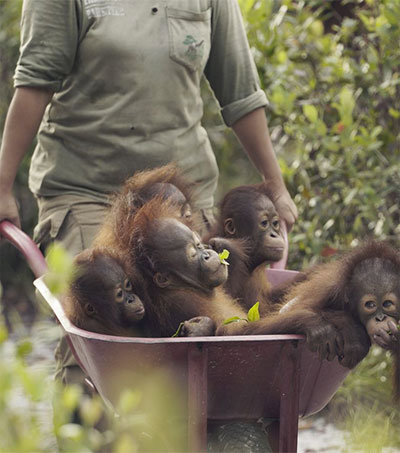 A small team of filmmakers from Natural History New Zealand (NHNZ) has made it their mission to tell the stories of Indonesia’s orphaned orangutans in a new documentary called, Orangutan Jungle School.

Cameraman Alex Hubert was sent on assignments for months at a time.

But how can you be something’s voice, if it cannot talk? That’s not an issue with orangutans, the crew says.

“Although they don’t talk, their eyes tell an amazing story,” he says. “They have all the same emotions we do.”

Hubert remembers meeting an orangutan during his first visit to the Borneo Orangutan Survival school. He went back 10 years later, to film Orangutan Jungle School, and that same orangutan grabbed his arm as he walked by the cage she was recovering in.

“I guarantee she recognised me,” he says. “She grabbed my arm and didn’t let go.”

There are 600 orangutans in the Borneo Orangutan Survival sanctuaries. It’s in these sanctuaries that people teach baby orangutans how to survive. The New Zealand crew calls it “jungle school”.

“This is one of the most symbolic stories of our time,” Curran says. “The fact is, humans can teach orangutans these skills and they can go on to live successfully. This project symbolises that humans can fix things up.”

Back in 1977, as TVNZ’s predecessor the NZBC came to its end, it set up a science department in Dunedin. The Natural History Unit turned out to be hugely successful and was sold. At one point, media mogul Rupert Murdoch owned it. These days, most of NHNZ’s shows are made for offshore channels like Animal Planet and National Geographic.

Orangutan Jungle School screens on New Zealand’s Choice TV but was made mainly for Canada’s Love Nature and Channel 4 UK.