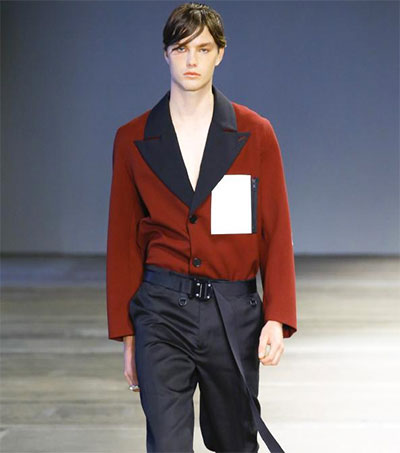 “Anticipation around Archibald’s Resort 2019 presentation has been quietly building to a fever pitch since the Melbourne-based designer was named the winner of the Australia-New Zealand round of the 2018 International Woolmark Prize for menswear,” Carolan writes. “But for Archibald, who studied formally in New Zealand and now teaches final year fashion students in his adopted city, the occasion is one that has been some six years in the making.

“Archibald’s brilliant Resort collection, Season Six – The Last Knitting Mill, is essentially a progression of the ideas he established with his winning capsule of six looks made for the local iteration of the Woolmark Prize.

“‘There were so many ideas that I had while conceptualizing [the Woolmark capsule]’, Archibald says.” “‘I wanted this collection to signify the time that I’ve spent [since] perfecting the cut of my jackets. The majority of my work is quite soft in the shoulders; it’s quite relaxed and oversized. I still have elements of that in the range [but] I wanted it to have a slightly more sartorial aesthetic.’

“The Last Knitting Mill forms part of a broader tendency in Archibald to view his collections not as individual offerings resistant to growth or change, but as installments in part of an evolving narrative. Archibald personally constructs all of his label’s samples himself, executing each piece with a level of finesse that speaks to a greater interest in process and detail, as well as a desire to do double time as an educator for both his customers and students alike.”