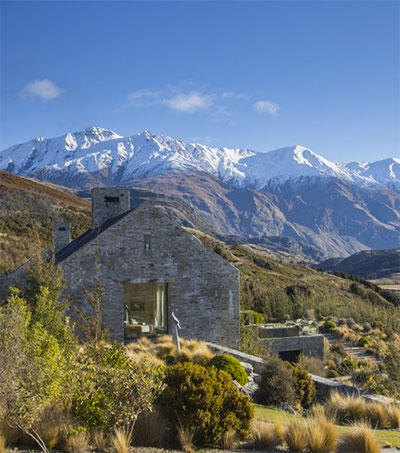 New Zealand’s natural splendour is renowned, but aesthetes are now making the voyage to check out a burgeoning architecture scene based on sustainable and indigenous materials. Charu Suri investigates for a feature in Architectural Digest.

“New Zealand’s luxury lodges have gained a reputation for being architectural marvels, with sprawling mansions built from locally sourced materials and often located on the margins of alpine lakes with stunning views,” Suri writes. “While many visitors go to New Zealand for the spine of mountain ranges, the vineyards, and the sounds, including Marlborough and Milford, there is a distinct architecture scene that has started to emerge.

“Architect Nat Cheshire, whose work includes The Landing, a luxury retreat and vineyard in the Bay of Islands, says there are a number of styles emerging in the country, particularly in the design aesthetics of the luxury retreat. ‘One strand is a kind of “organic minimalism” or “organic reductivism”,’ he says, ‘which proposes a spatial structure of discipline and clarity, leavened with the warmth and integrity of real material, including boulders pulled from the ground, plasters mixed with straw or shell and sand, precisely proportioned but roughly finished timbers and concrete cast into rough sawn forms.’

“Cheshire adds that this architectural philosophy generates a luxury of space, volume, and atmosphere, rather than of rarity or ostentation. ‘At its best, I think, it digs its toes into the soil and uses mass and the relationship between built form and landscape to assert its right to belong and stay in that landscape. Ours is a built history of light, stick-based construction. I am most exhilarated when we are confident enough to contradict that, and to do so beautifully,’ he observes.

“In the world of stand-alone houses and lodges, it would seem that New Zealand has a huge and ever-more-sophisticated sensitivity to land, material, and the relationship between the two. In the city, Cheshire likes to think that New Zealand has discovered how to transform cities in a way that is fluid, organic, fine-grained, as concerned with ‘software’ as with ‘hardware’, and delivering a very carefully weighted, informal kind of excellence.

“In this sense, the country’s architectural endeavor now reaches far beyond building and urbanism, up into leasing and development strategy, and right down to the menus and aprons and websites and teaspoons of the bistros. The architecture has turned into an act of holistic place- and experience-making.”