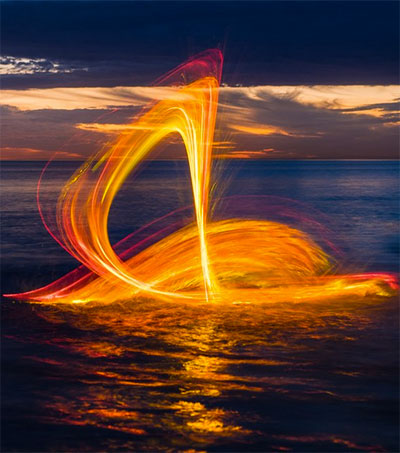 A decade ago, New Zealander Denis Smith was working in Auckland and living the high life. “I was killing myself working, trying to sustain [a] lifestyle,” he says to Wired journalist Michael Hardy. “It developed into an overwhelming sense of fear and depression.” Smith and his wife resolved to make a clean break. They sold their house, cars, and most of their belongings and moved to Adelaide. It was there that light painting saved his life.

Smith bought his first camera in Australia and began taking photographs during long walks through the wild Barossa Valley near their home. “I thought I was Ansel Adams,” Smith tells Wired “but then I joined a few Flickr groups focused on the Barossa Valley and realised that so many other people had taken exactly the same photos.”

But it was also on Flickr that Smith discovered the then-small community of “light painters” – photographers who shoot at night, using coloured light sources and long exposures to create intricately composed images.

Fascinated by the process, Smith began experimenting with his own light photography, eventually developing what became his signature technique: the “ball of light”. Smith discovered that by standing in place while swinging an LED light on a cord in a circle he could create near-perfect spheres of light. A short documentary about the process by filmmaker Sam Collins racked up a quarter-million views, turning Smith into one of the world’s best known light painters.

Smith now gives talks about light painting all over the world and sells a custom-built LED tool on his website so that amateurs can create their own balls of light.

Like his ball of light images, the liquid light photographs attracted significant interest on social media; the store on Smith’s website now sells the components of a “liquid light” system for DIYers. And although his passion has become a job – he’s now sponsored by Olympus – Smith tries to stay in touch with what attracted him to light painting in the beginning.

“It’s a fine line between it being something personal for me to escape the pressures of daily life, and a business,” he says. “I’m trying to keep some of it for me, but also satisfy the hordes.”