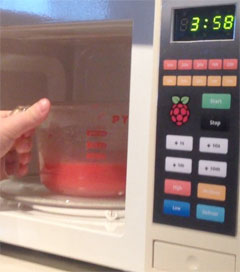 Cooking Up Raspberry Pi with the Internet of Things

New Zealand developer Nathan Broadbent was inspired to hack into his microwave after reading a post on Reddit about using matrix barcodes to instruct microwave ovens. Broadbent then cooked a raspberry pie using the low-cost Raspberry Pi mini-computer. The device, which can automatically cook ready meals, was used to set the pie’s microwave oven cooking times. The appliance ran the baking programme, and used Twitter to update followers, tweeting: “Just heated up some Raspberry Pie filling!”

The concept of connecting household appliances and other objects up to the Internet is known as the “internet of things”, the next major frontier of the connected world. The oven has been hooked up to a barcode reader, to scan ready-meal barcodes, and control cooking times based on individual product data. The microwave can respond to voice commands, and can be controlled from a phone or computer, developer Broadbent wrote in a blog post.

The developer decided to use conventional barcodes to control cooking times. He created an online product database to hold baking instructions linked to individual barcodes. The developer disassembled his microwave, redesigned the touchpad, and refitted circuit boards to include the Raspberry Pi. The £20 mini-computer is able to run software that listens for touchpad presses, controls the microwave, and accept commands received via the Internet. One of the programmes running on the Raspberry Pi listens to the barcode scanner, requests information from the database, and runs cooking applications. Broadbent develops web applications with Ruby on Rails. He is currently working at ZenPayroll.