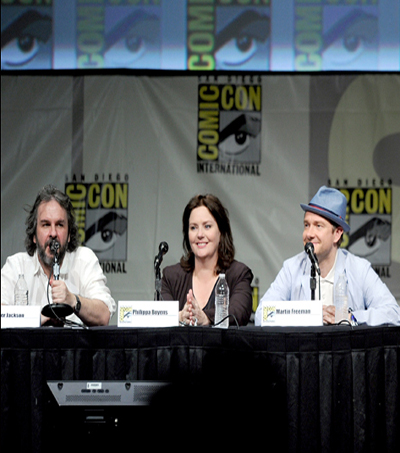 Comic-Con begins in San Diego today, with the New Zealand representatives ranging from Peter Jackson and the Hobbit producers to a small movie made by an Auckland animation school.

The Hobbit will be a major part of San Diego Comic-Con, with hype already beginning after Sir Peter Jackson unveiled the first poster for his next film, The Hobbit: The Battle of the Five Armies, on his Facebook page.

“Anyone else excited about San Diego Comic Con?” the filmmaker commented with the post.

USA Today said The Hobbit was one of the biggest events of Comic-Con, where people will camp out overnight to get a good spot.

Other New Zealanders at Comic-Con include a range of actors, including Rose McIver who will be making her first official appearance for the upcoming CW show iZombie.

Weta Workshop creatives will also be in attendance to show off their skills.

“Weta has become a hugely popular stop for enthusiasts of the characters, creatures and worlds we have created including those from the Middle-earth movies, science-fiction and fantasy projects and our film collectibles.”

At the other end of the scale, Auckland’s Media design School is presenting its latest animated short film Over the Moon.