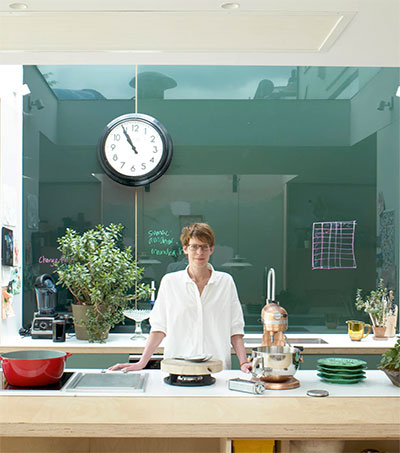 Chef Anna Hansen at Home in Her Own Kitchen

New Zealand-born chef Anna Hansen, of London’s The Modern Pantry, finally got to design her own kitchen. The result? She tells the Guardian she likes everything but the kitchen sink.

“We didn’t have to do a lot of work to the house when we bought it in 2014, but we did. Strangely, when faced with the possibility of designing my own kitchen, I realised I wasn’t actually sure what I wanted. It took a while to work it out, but we got there: it works perfectly,” Hansen says.

“I’ve only one regret – the second sink we installed in the island, next to the hob – for straining and rinsing and filling pots – should have been a bit bigger.

“The big red pot to my right I found at an antique fair in Denmark ages ago, while visiting my aunt there, and I’ve been lugging it about from house to house ever since. It feels like what you need to have in a kitchen – I’ve cooked so many things in it.

“My mum gave me that Victorian pressed glass cake stand at the back – it’s a bit fussy, but so appealing. I guess I like contrasting textures and colours, but I only want keep things I really love. I used to buy a lot more, but recently I’ve been wondering: what actually is the point?”

Hansen was trained under Fergus Henderson, the brainchild behind the St John restaurants, and later fellow New Zealander Peter Gordon. She is an ambassador for the charity Action Against Hunger.

In 2008, she opened The Modern Pantry in Clerkenwell and in 2012 was awarded an MBE for services to the restaurant industry.

The Modern Pantry opened its second branch in Finsbury Square in 2015.