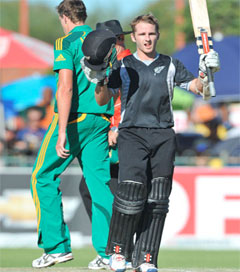 Century and a Win

Black Cap Kane Williamson, 22, finished unbeaten on 145 from 136 balls before New Zealand fielded their way to a 27-run victory over South Africa in Kimberley. New Zealand secured their first series victory in any format in 60 years of playing international cricket in South Africa, winning the first two matches in the three-match series. Captain Brendon McCullum saw the result in the ODIs as a big boost. He said the team showed it was capable of competing with the best but now needs to do it on a consistent basis. “I’m not going to underplay it,” McCullum said. “Achieving what we’ve achieved in this series and even how we’ve played today as well, we’ve showed the characteristics that we want to be known for.”