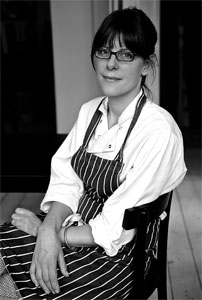 New Zealander Anna Hansen, 42, chef-owner of the highly lauded Clerkenwell restaurant The Modern Pantry, is a participant in next month’s inaugural Girls’ Night Out — three evenings in London designed to celebrate those rare women at the very top of the industry. Hansen, who grew up in Auckland, began her career unexpectedly in her early 20s, when she came to the UK and took up a dishwasher position at The French House Dining Room in Soho. It was a tiny kitchen, and she was soon promoted to trainee, working with the two chefs, married couple Margot and Fergus Henderson. They were friendly, encouraging, and she loved it. Hansen has only ever worked in one fairly macho kitchen “and I’ve never hated going to work so much in my life”, she says. Had she started out there, she adds, she doesn’t think she would have become a chef. In 2010, Hansen was awarded UK New Zealander of the year. Girls’ Night Out is on 11, 12 and 13 March.