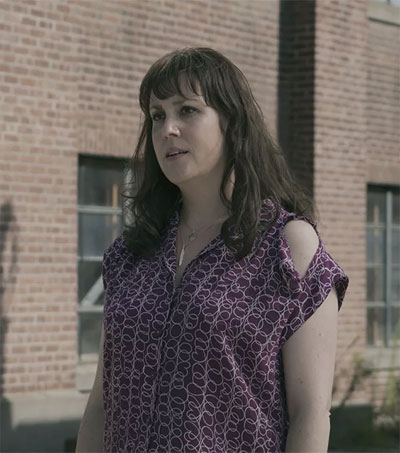 Melanie Lynskey talks to Entertainment Tonight about her role on the hotly anticipated series, Castle Rock. The New Zealand-born actress opens up about why this particular type of horror – which is based on characters and settings from the stories of Stephen King – is something she finds interesting.

“I have no adrenal function. I don’t get [startled]. Like, if something scary happens, I have no reaction,” Lynskey shared. “My fiancé [the incomparable Jason Ritter] is constantly hiding behind back corners, crouching, trying to jump up and scare me, and I just go, ‘Oh, OK.’”

“So those kind of slasher movies and jump scare things, I don’t really get frightened by,” she said. For her, the best kind of horror is the creeping dread and unnerving terror that is a staple of King’s novels and the films adapted from them (at least, in the best examples).

“Creepy psychological horror is one of my favourite things,” Lynskey said.

Which is why Castle Rock is such a perfect fit for her. Not to mention the fact that she’s been a life-long fan of the horror maestro’s vast oeuvre, and is now a part of his fictional universe.

In the realm of Castle Rock, Lynskey, 41, plays real estate agent Molly Strand, a woman beset on all sides by people who don’t trust her, including her sister (and people who are only looking to feed her addiction).

While fans explore the nuances of the cursed dying town and try to parse out the surreal scenes of school children holding a mock trial in a run-down motel (which remains the show’s most inexplicable and yet fascinating vignettes thus far), it will be Lynskey’s beautifully troubled, painfully underappreciated and hilariously sardonic character that buoys viewers and brings them along for a shocking, chilling ride through one of TV’s most loving crafted worlds.