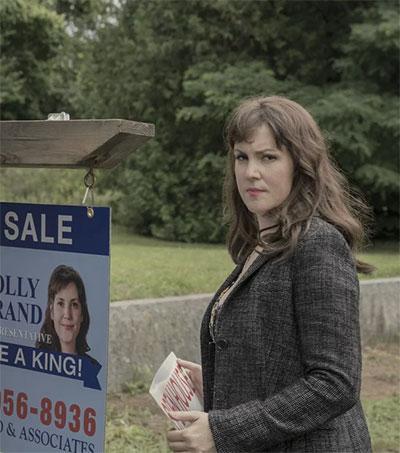 “Castle Rock is a giant basket of Easter eggs for [Stephen] King people, but for the rest of us it’s a decent show layered with supernatural secrets waiting to be decoded,” according to John Anderson writing for The Wall Street Journal. New Zealand-born Melanie Lynskey stars in the television series, which premieres this week in the United States on Hulu.

“While it has the desolate, wintry look of Fargo, with those gloomy snowscapes transported to the Victorian house-lined streets of Maine, it’s more reminiscent of the King-influenced Stranger Things,” Anderson writes.

“There are a number of story lines afoot in Castle Rock, which was filmed in Massachusetts, and they will likely cohere more and more across the season’s 10 episodes.”

In a Variety review of the show, chief critic Daniel D’Addario writes:

“Lynskey’s neurotic realtor, haunted by a timidity that manifests itself in illness, is a bright spot [in the series], showing us a person who has been warped by life in a town where metaphysical danger is a fact of life.

“Were every character written with the care that goes into Lynskey’s Molly Strand, Castle Rock would be a shimmering example of just how powerful – and well-suited to TV – King’s work can be.”