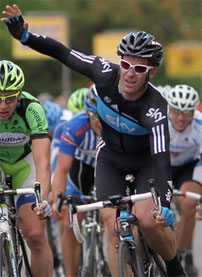 Cyclist Greg Henderson has claimed the third stage of the Tour of California completing the 192.2km road race from Auburn to Modesto in 5 hours 14 minutes 29 seconds. Juan Jose Haedo of Argentina finished second, just a bike’s length behind Dunedin-born Henderson, while Norwegian world road champion Thor Hushovd was third. “There was a lot of chaos on the final lap,” Henderson said. “We were all lined up. With 1 metres to go, I thought no-one had come around me, so I just kept my head down. I was absolutely spent at the line.” Henderson races for Team Sky.