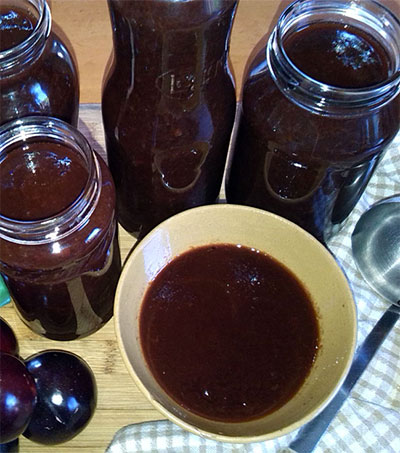 Back in March 1992 in Port Chalmers, Dunedin, The Dead C vocalist Bruce Russell and his wife Kate McRae entertained Siltbreeze record label owner Tony Lax over breakfast where they enchanted him with a homemade plum sauce. Lax writes about the memorable morning as part of a Lucky Peach feature about breakfasts around the world.

“At the time, [Port Chalmers] was the heart of one of the greatest contemporary music scenes on the planet. Its aorta was a (mostly) cassette-tape label named Xpressway Records. The label’s founder, Russell, and his wife, are residents of the sleepy hamlet. Bruce was also one of the prime movers in The Dead C, a band whose recorded output in America was issued by yours truly.

“My first morning in Port Chalmers, I rolled out of bed and ambled into the kitchen, lured by the aroma of grilled homemade sausages and rosemary-spiked roasted potatoes. Poached eggs were minutes away, and fresh bread was crisping in the oven.

“The room became silent as out collective appetites took stock of what lay before us. The silence was suddenly broken when Kate asked, ‘Tom, would you like some plum sauce?’

“A repurposed port-wine bottle now filled with dark sauce made its way to me. I poured a small pool of it on the side of my plate. Politely, I swished a couple of roasted potatoes through it. Not bad. Next I dipped a forkful of sausage. Pretty good. Ditto eggs n’ toast. Finally, I speared a bit of everything together, dragged it through, then hoisted it into my maw. Goddamn, it fucking ruled! Not only was it nothing like ketchup, it was the single greatest condiment I had ever tasted.”