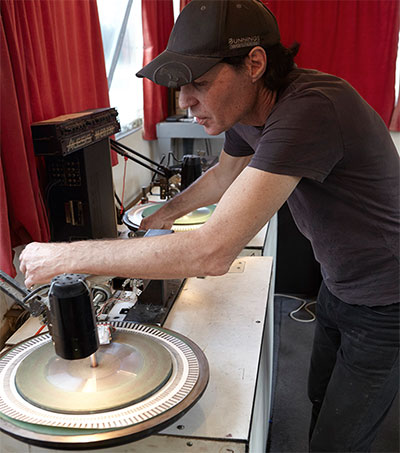 Mount Somers is famous for two things: its natural beauty, and being the home of Peter King Lathe Cut Records, Noel Meek writes in a feature for UK music magazine The Wire.

King’s parents were both musicians, his mother a classically trained pianist who now plays organ in local churches, his father a guitarist in country and western bands. His parents still tour today, performing in old folks’ homes. King spent a decade from the age of 16 as an apprentice engineer, picking up work in and around Ruapuna. He worked as a welder and fitter developing some of the skills he’d use later cutting audio discs. Around the same period he began picking up work as a drummer and a singer in rock bands.

The early 1970s was a difficult time for independent music in New Zealand – very little local music got radio play, and only a handful of acts made it into the charts. The music scene, such as it was, was hamstrung by conservatism and cultural cringe.

“Our 45s went round different radio stations around the world, because I sent them out to them,” he recalls. “But nothing much happened. So I thought, we’ll go into a different field.”

That new field would be working as a session musician, and later as a sound engineer, recording commercials for the New Zealand Broadcasting Corporation (NZBC). He learned the ins and outs of the recording industry, also working at times for EMI New Zealand, which ran the only vinyl pressing plant in the country.

But it was in 1984 at the NZBC, then rebranded Television New Zealand, that he bought the Neumann lathe cutters that he still uses to craft lathe cut records today.

King produced his first lathe in 1987, which was also the year that EMI New Zealand closed the country’s only pressing plant, which had been open since 1948. King suddenly found himself one of the few local alternatives as vinyl pressing passed to foreign shores.

In the early days it was the local underground scene that fired King’s imagination and kept the machines rolling.

His work now sat in record shops all over the world, and they caught the eye of the mainstream – one of his biggest releases in the 90s was a massive run of lathes for The Beastie Boys.

Orders have barely slowed down since.

So what does the future hold for Peter King Lathe Cut Records?

“Lasers,” he exclaims. The only way we’re going to reach vinyl quality in polycarbonate is by using two laser beams, which I plan to introduce shortly. We can take it to the next level, to get an even higher quality sound out of our records.”