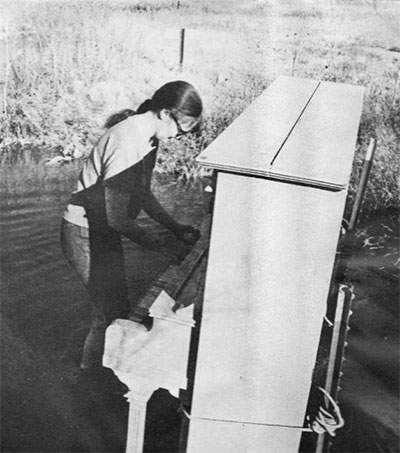 “New Zealand-born Annea Lockwood and the Brazilian Jocy de Oliveira are two composers separated by a distance that is geographical only,” Louise Gray writes for British music magazine The Wire. Their reissues, Lockwood’s Tiger Balm and de Oliveira’s Estórias For Voice, Acoustic And Electronic Instruments, are reexamined.

“One of the deep pleasures of these two reissues is a sense of how both composers connected with a growing soundworld, deep and sonorous, even as they helped to expand it, spurred on by the exhilarating possibilities proffered by the remoulding of contemporary classical music from the late 1950s onwards,” Gray writes.

“Separated in age by only three years, both started out as pianists. During their classical studies, both women came to see limitations in the instrument of their virtuosity. Their respective searches to create and rethink composition led them to expansive sonic territories: Lockwood from process and ritualistic music to the sonification of natural phenomena.

“Both composers are also linked within a specific musical community as contributors to Source: Music of the Avant-Garde, the California-based magazine. It’s hard to overestimate the importance of the 11 issues of Source: simply, they connected people and created a situation in which ideas could be expressed and explored, all with enough time to percolate.

“The natural world is never far off in Lockwood’s music. Tiger Balm was the first work she composed after her glass concerts of the late 1960s. For tape, it’s a work of deep flows, the motive forces of which are generated by Lockwood’s juxtapositions of sounds and their innate rhythms.

“Tiger Balm arose out of an interest in creating a ritual that makes sonic links between the depth of time and the contemporary.”

Lockwood, a professor emeritus at Vassar College, New York since 1982, has retired from teaching though she still writes and performs.

She was born in Christchurch in 1939.