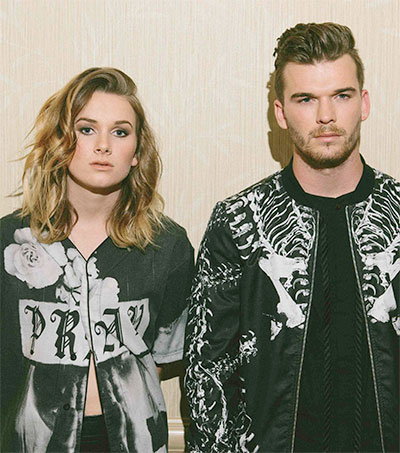 When New Zealander Georgia Nott was young, her parents took her to wedding and church concerts where they performed with her aunt and uncle as an ABBA tribute band. “I couldn’t walk at the time, so I would sit beside the stage in a car seat. But it’s funny – I wasn’t allowed to go to their shows any more at one point, because I’d try to sing along too much.”

The knack for performing never left Nott. Now 20, she sings gentle, restrained lead in Broods, the electronic-rock duo she formed with her multi-instrumentalist brother Caleb Nott, 22. They are currently touring the United States.

She never lost her love of ABBA, either. Songs from the siblings’ 2014 debut Evergreen (such as “Bridges,” “Everytime,” and a funereal “Sober”) feel like that Swedish supergroup’s catalog classics, but through a dark, flickering kaleidoscope.

“ABBA made some of the best pop music – their melodies, harmonies and instrumentation were super-genius,” she says. “So we still listen to old-school pop for inspiration.”

Broods, who are originally from Nelson, perform at The Complex in Salt Lake City on 13 March and at the Bluebird Theater in Denver on 14 March. They tour Australia in April ahead of playing summer festivals in the northern hemisphere through May, June and July.