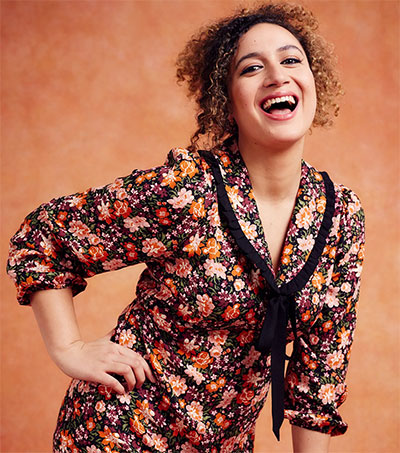 “Given the sheer amount of romcoms you reference in Starstruck, I can only imagine you’re a massive fan of the genre. But would you call yourself a critic, as well?” Glamour’s Francesca Specter asks.

“Of course. You’ve got to be both. For instance, I think often women are funnier than men – but in romcoms they’re not given credit for that. So that’s one thing I try to take from this genre and get right. I position Jessie as a funny character. And she’s intentionally funny,” Auckland-born Matafeo, 29, says.

“Dare I ask your favourite rom-com?”

“I’ve been asked that before, and in the past I’ve said I can’t decide between Moonstruck, When Harry Met Sally and Bridget Jones’s Diary. But in all honesty, my heart of hearts it’s Bridget Jones’ Diary. I think it’s just one of the most perfect, fantastic films.”

In a 4-star review of the new season, The Guardian’s Rebecca Nicholson writes:

“There are few series that can sustain being watched in one sitting, but Starstruck is one of them, and I would argue that this lovely, warm, witty series even benefits from a binge-watch. Each episode may be short and sweet, but the cumulative effect is magical.”