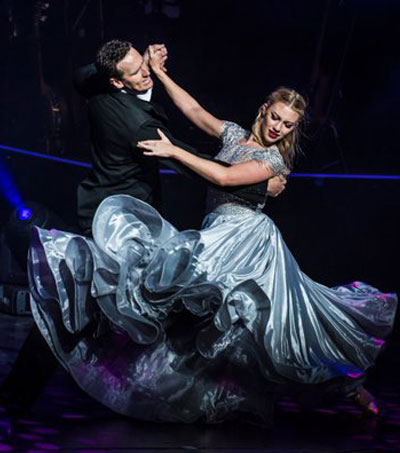 “Dancing supremo Brendan Cole is bringing his fantastic footwork to Bradford, with his latest spectacular show All Night Long,” which will show at the Alhambra on November 13, writes Helen Mead in an article for Telegraph & Argus.

“He’ll be taking to the stage at the Alhambra to wow audiences on his 10th anniversary tour, which will see him joined by a sensational cast of guest dancers and a talented 14-piece band and singers.”

“An extravagant mix of Latin fever and ballroom magic will incorporate dances from tango to cha-cha-cha, waltz and foxtrot, with a few unexpected highlights, one being Brendan playing acoustic guitar,” reports Mead.

“I pick up my guitar from time to time and can play a couple of songs,” said Cole. “The team dared me to play. I play Ed Sheeran’s Thinking Out Loud.” “I have a really beautiful guitar and enjoy playing it with a group of world class musicians.”

Earlier this year the New Zealander who was a judge on the NZ show Dancing with the Stars, left Strictly after 14 years with the show.

“I have been able to take up opportunities that I could not have said yes to had I been on Strictly,” he said.

“Previously, there would be five months of the year when I could not agree to anything else.”

“There are some really good dancers and very talented people. As time goes on you see the performances step up. I really like Graeme Swann and Oti Mabuse and Faye Tozer and Giovanni Pernice.”