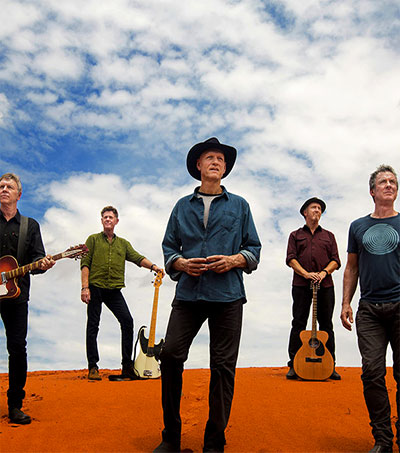 For Bones Hillman, the New Zealander who replaced Midnight Oil bassist Peter Gifford in 1987, The Great Circle “has been more than a tour. It’s reconnecting with people.”

After the Oils split in 2002, Rob Hirst, Jim Moginie and Martin Rotsey kept playing together, forming the psychedelic-surf band the Break with Violent Femmes bassist Brian Ritchie. Hillman (pictured second from left) emigrated to the US, working as a session bassist in Nashville and going on the road as a sideman for folk and country artists.

He says there were “a couple of emails every year” hinting at a full-scale reunion, beyond the charity appearances that dotted singer Peter Garrett’s tenure in Australia’s parliament. “But I stopped thinking about it.” When the emails got serious and Hillman returned to Australia in late November 2016, for the initial rehearsals, there wasn’t much playing at first. “We had dinner and drank beer,” he says fondly. “I concentrated on relationships, the dynamics we had as individuals. ‘Oh, I remember you. You’re a mate.’”

The Great Circle continues to be “a heightened emotional experience” for the bassist. In Paris, his guest list included “the first love of my life – she came with her husband to the show. I’ve had friends die while I’m on this tour. When we were going full steam, before we stopped, I just felt like we played gigs and moved on. I see it in a different light now. The band means so much more to people than the songs. It is a responsibility.”

Midnight Tour are now playing sold out shows throughout Australia, including in Sydney with the John Butler Trio on 11 November.