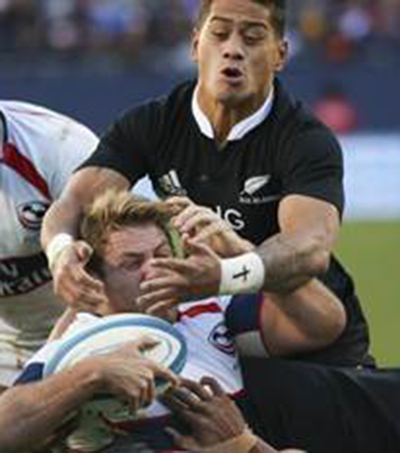 Saturday’s landmark rugby game at Soldier Field, Chicago, saw the All Blacks play the USA Eagles in front of a sell-out crowd of 61,500 – the largest to witness rugby in the United States.

Both curious and committed fans crowded into the lakefront arena as the world’s top team, the All Blacks, opened a 43-6 first-half lead and beat the USA Eagles 74-6 on a crisp, sunny afternoon.

Saturday’s game celebrated both community and an emerging sport that returns to the Olympics in 2016 after a more than 90-year absence.

Several fans were quick to mention both the game’s historic nature as well as the sport’s appeal.

“To see something like this is incredible,” said Bill Weckstein, a Naperville-based multisport official and a former rugby player. “I think the national team players are stunned — they sold out an NFL stadium.”

The 80-minute contest offered a touch of home for Grant Leersnyder, a New Zealand native now living in the United States.

“This is fun, we get our taste of (New Zealand) every couple of years,” said Leersnyder, an aircraft parts salesperson clad in All Blacks attire with a New Zealand flag serving as a cape. “It’s good to see the Eagles playing. The score isn’t probably going to be that interesting, but it’s going to be a fun game,”

Ryan Brooks, meanwhile, made the trek from Anchorage, Alaska, where he’s a recent convert to the sport.

“It’s an absolute battle,” he said. “Forty-minute halves, it doesn’t stop or stops very seldom. It’s not like stopping every 10 seconds like American football. It’s go, go, go, go. The level of fitness is huge.”

“It’s tough, you’ve got to work hard … (but) you have fun with other players and get a chance to meet other people,” said Galloway, joined by teammates from Illinois’ lone African-American middle school rugby team and reigning Illinois champions.

Saturday’s game could help build more interest in the sport, which currently has more than 107,000 active players affiliated through USA Rugby, the sport’s governing body.

“Just getting this many eyes on it is good for our organization and to be able to grow the sport and bring it to more people,” said Drew Parker, youth development officer for Rugby Illinois. “Once they get exposed to the sport they tend to love it.”