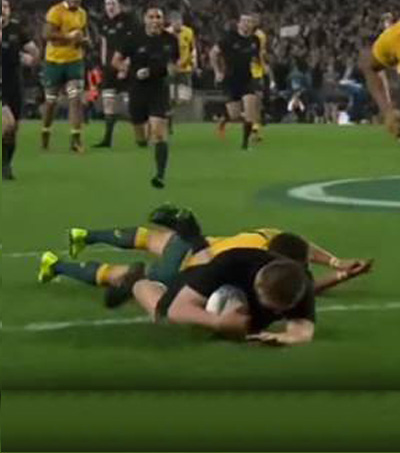 “Australia knew the All Blacks would be in a vengeful mood after their defeat in Sydney,” the Observer’s Ian Malin reports. “New Zealand duly handed out a rugby lesson [with a score of 41-13]  to keep their hands on the Bledisloe Cup and extend their unbeaten record at Eden Park to 34 matches in their final game before they defend the World Cup.

“It was a perfect night for the All Blacks captain, Richie McCaw, who was playing his 142nd Test, a world record, and Dan Carter, in his final Test on home soil, who contributed 16 points in a commanding display. McCaw was given a standing ovation by the Auckland crowd when he was replaced 12 minutes from time.

“This was a five-try thumping. The return of Quade Cooper to Australia’s fly-half spot had been the chief talking point in the build-up to the game but it was New Zealand’s No10 Carter who sprinkled some stardust over the match midway through the first half.

“Israel Folau scored a try for the Wallabies when he caught a clearing kick to outstrip the New Zealand defence three minutes from time but it was no consolation at all for the outclassed Wallabies.”