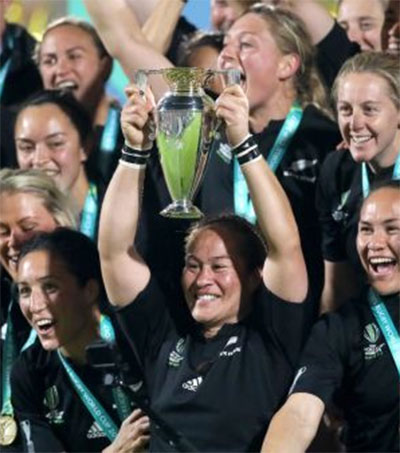 “New Zealand are world champions again. [The Black Ferns] ruthlessly snatched the cup from this immensely talented yet ageing English side (seven of them are 30-plus) in a style that must have made the early rising Kiwis go rouse the rest of the population. Come see our girls cook the Poms,” Gavin Cumminskey reports from Belfast’s Kingspan Stadium for the Irish Times.

“The Ferns drew first blood in an electrifying affair. A seemingly manageable crossfield punt by flyhalf Victoria Subritzky-Nafatali was rolling towards Scarratt when it suddenly skidded into Selica Winiata’s hands. The fullback being a natural born sprinter, glided away.

“Both teams had landed their heaviest blows by the hour mark. England coach Simon Middleton unloaded his reserves. The entire frontrow made way, as did their unflappable nine Mo Hunt and warrior flanker Marlie Packer.

“But it was over. New Zealand kept unloading on them with [Kendra] Cocksedge squeezing through the previously unbreakable English defence to open up an 11-point gulf. Maybe the intensity and hundred-plus tackles needed to see off France drained the energy reserves needed to resist this phenomenal offering to the Maori gods.”