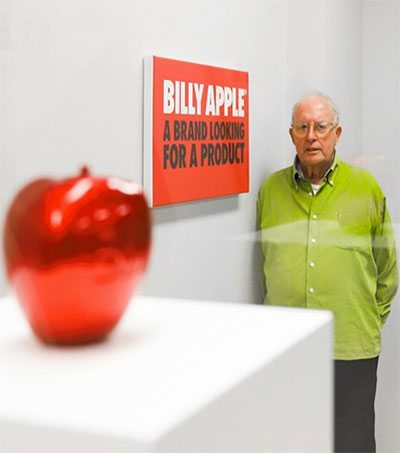 Billy Apple in Hong Kong and in Focus

To present 21 works in Hong Kong, spanning approximately six decades (1962–2018), is an unusual occasion for Billy Apple, a groundbreaking New Zealand-born artist whose pop-infused conceptual practice is mostly acknowledged in New Zealand, England (where he studied and worked from 1959 to 1964) and the United States (where he lived from 1964 to 1990). Art site Ocula reports.

“The Immortalisation of Billy Apple® (2009–2015), is a black-and-white photo of an elderly Apple looking at his live cells through a microscope, with nearby in the same room, the looped video, The Immortalisation of Billy Apple® Stage Two, Billy Apple® Cell Line (2010), showing those microscopic cells multiplying. Among this grouping is I Consent (2009/2015): a canvas-based text documenting a consent form that Apple signed in 2009 as part of the contract around his donation of cellular material for research. It ensures he understands that this ‘may enable unrestricted use of [his] cells in research outside [his] control.’

“Overall, these two types of body-referencing artwork are like bookends: four at the start of Apple’s career, and four referencing a project which, as Apple’s body nears its physical end, could surprisingly carry on long after its disappearance, potentially reappearing in other iterations.

“In our current historical period of late capitalism – when debates about the global politics of trading, not to mention the consequences of open conflict between the United States and China, Europe and Canada are making headlines – this exhibition of Apple’s work could not have been better timed and better staged in Hong Kong, the world’s fifth-busiest trading port, a traditional freeport, and a financial hub. The works on view do a good job of tracking the development of an artist who, out of his passion for the nuts and bolts of advertising, turned himself into a product and proceeded to interrogate the nature of transaction and negotiation on art’s stage.”

Apple was born as Barrie Bates in Auckland in 1935.