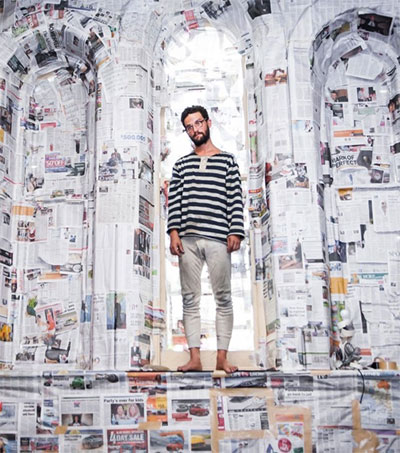 Barnie Duncan’s …him a Living Thriving Piece of Art

“New Zealander Barnie Duncan has created an unusual yet intriguing piece of art that is somewhat unpleasant in a refreshing way, and yet able to draw in the audience with subtlety … in a way liberating them from their own troubles as they attempt to understand what it is to be in this man’s world,” Arts Hub writes in a review of Duncan’s one-man show …him, performed recently at Brisbane’s Powerhouse.

“Enter the world of a recluse who lives obsessively through his only connection with the outside world – the daily newspaper,” reviewer Devon Cartwright begins.

“Amid piles of newspapers, and selected clippings strewn across the floor, the walls, ceiling, door, and window, in a space that’s dimly lit and intimate – albeit with uncomfortable seating – is where the audience will find …him. This production is as much experience as it is performance; audience members will be brought into the twisted world of a man totally detached from reality, with the sole exception being the newspapers being delivered through the mail slot in his door. But as the performance progresses, the audience may find themselves asking whether they are viewing the internal struggle of a man dealing with deeper issues, or a reflection of our own selves trapped in a world governed by society.

“Duncan’s stroke of brilliance is perhaps his utilisation of the newspapers as inspiration to pull from, allowing each performance to be different and unique each time as news unfolds with time. This performance is a living, thriving piece of art that breaths life, and reflects what is going on in the world.

“Building on successful runs Melbourne, Auckland, and Adelaide, [New Zealand-born] director Geoff Pinfield has delivered another wonderful iteration of this production tucked away in a quiet corner of [the] Powerhouse. Pinfield has crafted a sense of disorder, while focusing greatly upon the finest of details that draw the audience in; his ability to create a world in which the audience is unsure if they are looking in, or alternatively inside looking out is a testament to his and Duncan’s vision.”

…him won the Fringe Award at the 2013 Auckland Fringe Festival.