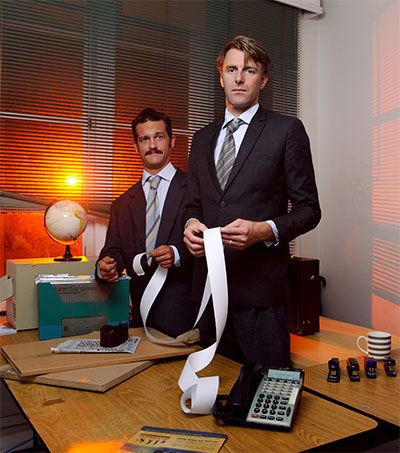 In the Office With Trygve and Barnie

“Following the delirious success of Kraken and Nautilus, [Trygve Wakenshaw’s] two solo shows at the Mime Festival, [he] joins forces with fellow New Zealander, Barnie Duncan (Calypso Nights), in [the] extraordinary celebration of the banal, [Different Party],” TNT magazine’s editor writes in a review of the show on in January at London’s Soho Theatre.

“Business drones Gareth Krubb and Dennis Chang whittle away the minutes in the barren office of Ruck’s Leather Interiors, patiently waiting for the phone call that may or may not give them something to actually do. In between the drudgery of the 9-5, the minutiae of office existence open up a fantastical world of fancy where a sticky piece of paper turns men into pigeons, where briefcases are dogs, and where that elusive client is always a missed call away.”

The Telegraph said of the show: “A howlingly funny, exquisitely performed hour of office-set slapstick from two of New Zealand’s most exciting comic talents.”

Different Party is at Soho Theatre from 8 January until 20 January.