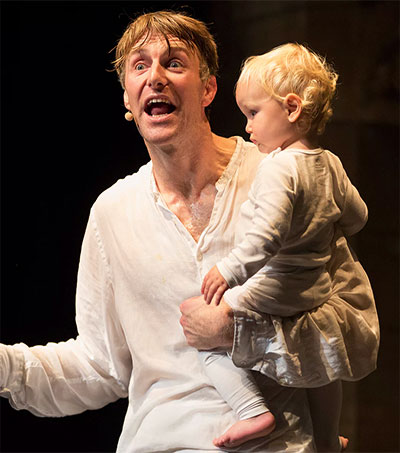 This year, Edinburgh Festival Fringe’s “best-loved mime act” New Zealander Trygve Wakenshaw has teamed up with his one-year-old son on stage in Trygve vs a Baby.

“The publicity asks: who’s more entertaining? And the answer, unsurprisingly, is Phineas, at least within the format daddy has built for him,” Guardian reviewer Brian Logan writes. “The show begins with the pair pottering together on stage, and the audience loses its heart instantly to Wakenshaw fils, as he toddles among the footlights, self-consciousness barely a speck on his horizon.

“In the show, Wakenshaw sets up elaborate silent comedy scenarios, into which Phineas is then thrust in roles that can accommodate his ungovernable behaviour. He plays the sun, tormenting a vampire. He plays a toreador stabbing (in fact, not stabbing) Wakenshaw’s bull. The joke is dad’s exaggerated struggle to get the performance he wants from his son, while son – no matter what he does – proves highly watchable anyway.

“It’s a fun show, and fascinating for anyone interested in what makes a compelling stage spectacle. This [show] remains a delightful oddity, and a lovely spin on the authority figure v agent of chaos dynamic.”

Trygve vs a Baby is on at Assembly Roxy from 22-27 August. Babies do not require a ticket.

Wakenshaw performs in another Fringe show with fellow New Zealander Barnie Duncan. Different Party is on until 27 August also at Assembly Roxy.

Wakenshaw grew up in Hastings. He now lives in Prague, Czech Republic.