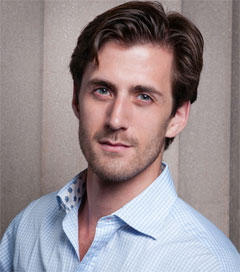 “I’m always very cautious to use the words Pop and Classical,” Adams said, “Because you’re bound to offend someone. In The Memory Palace, there’s a kind-of narrator. One song is set in World War II, another is about two people reminiscing about when the Underberg Building, a kitchen supplies building in New York got torn down.”

“My passion above all is to tell a story,” he said. “That may sound very generic, but it’s not. I love singing a great deal. I love the form of opera and recital.

“My aim is to take people deep inside themselves, to feel something so real, but, at the same time, outside of themselves.”

This coming season at San Francisco Opera, Hadleigh appears in, amongst others, Tosca (a Jailer), La Traviata (the Marquis) and Madame Butterfly (Imperial Commissioner).