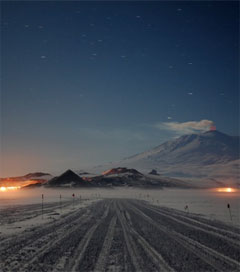 One of those working year-round on Antarctica in a non-research role is New Zealander Anthony Powell who as well as maintaining communications networks for a living, is a “self-taught photographer and filmmaker”. His documentary Antarctica: A Year on the Ice centres on others in such roles, among them a fireman, an office manager, and a woman who manages her base’s general store.

The film, which recently screened at the media arts organisation, Chicago Filmmakers, “is as awe-inspiring as the sort of straightforward nature documentary you might see at the [wrap-around] Omnimax Theater,” Chicago Reader reviewer Ben Sachs writes.

“It shows us that, even in the most forbidding conditions, little neighbourhood communities still take root.

“Most documentaries … [reflect] the understandable assumption that people capable of scientific discovery are inherently more interesting than the ones who cook their dinner or transport their waste. Powell’s movie rebukes that assumption by reminding us that the menial workers in Antarctica experience the same natural phenomena as the research scientists.

“These [‘neighbourhood’] movies are much easier to watch than they are to review –they’re unambitious by design, yet convey such authority in their details that they linger in the memory much longer than ‘important’ works.”