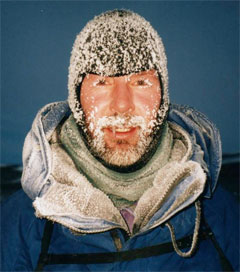 Life on the Ice Makes for Award-Winning Viewing

A beautifully shot documentary about a year in the life of a New Zealander living in Antarctica was the big winner at the Calgary International Film Festival, snapping up two of the major awards this year, Calgary Herald reviewer Eric Volmers writes.

Antarctica: A Year On Ice, the first feature by Christchurch photographer Anthony Powell, won both the Audience Choice Award for best documentary and the Best Documentary Feature Discovery Award at the festival.

“It was a fantastic film,” festival executive director Stephen Schroeder said. “People left just gushing with pleasure. I think that film is going to continue to turn heads in a lot of places.”

According to the 2013 New Zealand International Film Festival site, “Powell has been a regular denizen since 1998, working three years at Scott [Base] as telecom technician, another six winters at the US base McMurdo as a satellite engineer, and subsequent summers in other technical roles. Powell, a self-taught photographer and filmmaker, designed and built camera systems that could function in the extreme cold of the Antarctic winter.”