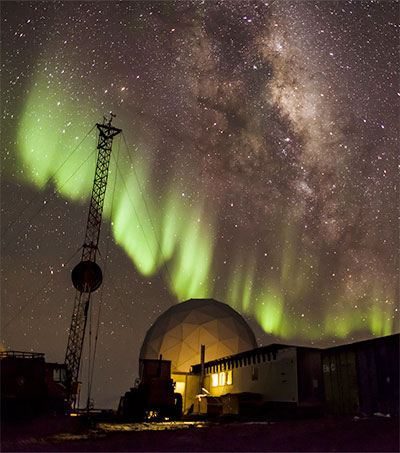 “Here you can learn that penguins are a lot dumber than certain animated films would like you to believe, and that seals often slide out of the ocean without a sense of direction and freeze to death. Powell’s shots of constellations above the cloudless night sky are fascinating. His images of geographical ice oddities are like lovely abstract paintings, and the polar stratospheric clouds unique to Antarctica are mind-blowing.

“The film’s real treat comes in Powell’s friendly personal interviews with everyone from McMurdo Station’s scientists and cafeteria cooks to the fire crew.”

In a Los Angeles Times review, Kenneth Turan begins: “Powell has, he says, spent most of his adult life in Antarctica, living at the bottom of the world for more than 100 months (including nine very cold winters) spread out over a 15-year period.”

“What his friends back home in New Zealand most want to know, he says, is ‘what’s it like down there?’ The unexpectedly entertaining documentary he made in response, Antarctica: A Year on Ice, provides an engaging and fascinating answer,” Turan writes.