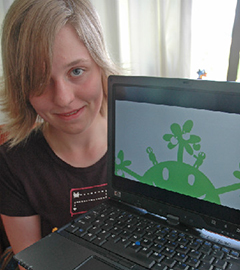 A short film by 16-year-old Nastasha Bishop has had its US premier at the prestigious Environmental Film Festival in Washington DC at the weekend. As the Washington Post notes, the festival is misnamed. These are not feel good movies for tree-huggers but “urgent stories about shady politicians, cancer-causing chemicals and the impact of technology on our collective happiness”.

Bishop’s animated film, Arboraceous, has already won two international awards at the Japan Wildlife Film Festival and is one of four Kiwi movies selected for the festival.
Now aged 17, Bishop wrote, directed, animated and scored the four-minute short film while attending Samuel Marsden Collegiate in Whitby, Wellington. She received an $8000 scholarship to study at Unitec when she won the Outlook for Someday film challenge.

Aboraceous is a morality tale about the need to live in harmony with nature.

It premiered at Washington’s National Museum of Natural History alongside photographer Anthony Powell’s Antarctica: A Year On Ice, both of which were introduced by the New Zealand embassy’s deputy chief of mission, Anthony Smith. The Smithsonian’s Brian Huber, department of paleobiology chairman, led a discussion following the dual screening.
Powell’s film explores the extreme conditions of the southern continent, where he spent 10 years filming.

The other Kiwi entries are Beyond the Edge 3D and co-UK production, Thin Ice.