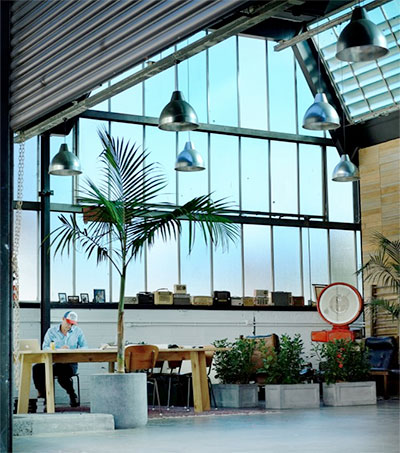 “Creative enterprises and unique collaborations are flourishing in Auckland thanks to the dramatic renovation of a collection of 1960s city council workshops,” Monocle reports.

“Until two years ago, the City Works Depot was a near-derelict collection of rusting sheds that Auckland had almost forgotten. The sheds, originally built by the city council, had been abandoned for close to 20 years – and yet the city’s commercial hub is just a few short blocks away. ‘It had been invisible for so long that it just wasn’t on people’s radar,’ Nat Cheshire of Cheshire Architects says.

“In a little over a year, the place has become a thriving hub for the city’s creative classes. Design studios, advertising agencies, architects and production companies have made the place their home, attracted by the lofty, metal-framed buildings with their soaring ceilings, generous spaces, filtered light and classic mid-century modernist touches.

“‘It was pretty rough and ready and raw,’ architect Matt Godward says. He and business partner Julian Guthrie shifted their business to the depot a year ago into a high-ceilinged bunker in the centre of the building. ‘It’s perfect for us, the way we work and how we operate – it feels like a proper studio,’ Godward says.

“The depot opened in 1968, designed by the Auckland City Council’s chief architect Ewen Wainscott. Few Aucklanders have heard of him and yet his legacy is an enduring one: rigorous, elegant modernist buildings, often for the most prosaic of purposes. Wainscott drew his design from US tank factories, which he visited earlier in the 1960s.

“‘One of the critical things the city has learned is that its ruins are treasures,’ Cheshire says. ‘And the City Works Depot was probably one of the greatest ruins of them all.’”