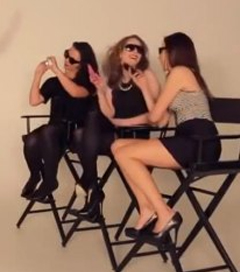 YouTube’s parent company, Google, has admitted the site made a mistake when it removed Auckland University law students’ viral parody video of Robin Thicke’s “Blurred Lines”. The video received over 300,000 views before it was briefly removed from YouTube after being deemed too raunchy for the video-sharing site.

Lubbock says she cannot understand why the video was temporarily taken down.  “It’s been flagged by users as inappropriate because of sexual content and stuff like that. My opinion is people don’t like the message behind it. It was meant to be a comedic sketch and the fact it’s been taken down is a massive double standard,” said Lubbock.

Although comedic, the video is also meant to highlight the different ways women are portrayed in the media compared to men.  “We understand that it is a common theme in the media for particular men to have videos with women frolicking around… But the attitude of [Thicke’s song] came across to us as being quite arrogant, especially with the issue of consent – some of his lyrics were quite questionable and a bit presumptive,” the girls explain to The New Zealand Herald.

Under YouTube’s Terms of Use, if a video is flagged inappropriate, it is viewed by moderators who make a decision to remove the video.  Since returning to YouTube, Defined Lines has received a further 100,000 views.

The New Zealand Herald reports that a Google spokesperson said while the web giant does not comment on individual videos, it sometimes makes mistakes.

“With the massive volume of videos on our site, sometimes we make the wrong call.

“When it’s brought to our attention that a video or account has been mistakenly removed or suspended, we act quickly to reinstate it.”