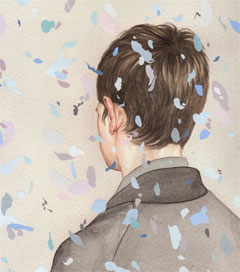 Auckland Illustrator Lands Space on the Wall next to Banksy

25 February 2014 – Auckland-based illustrator Henrietta Harris will exhibit alongside the world’s most famous street artist at the Robert Fontaine Gallery in Miami from 8 March.

The exhibition, called Insiders: Street, Graffiti, Urban, features Banksy, a street artist whose identity remains unknown, who rose to prominence for his provocative stencilled pieces in the late 1990s.

According to her online biography, Harris “has skillfully hand-drawn hands, faces, brains, glaciers and at least seven other Categories of Things, many of which have appeared on canvases in shows all over New Zealand, Australia, London and New York”.

Harris’ work, for an article on “Gentlemen Pâtissiers”, appears in the March issue of Vanity Fair France.

Harris graduated in 2006 with a Bachelor of Fine Arts from Auckland University of Technology.