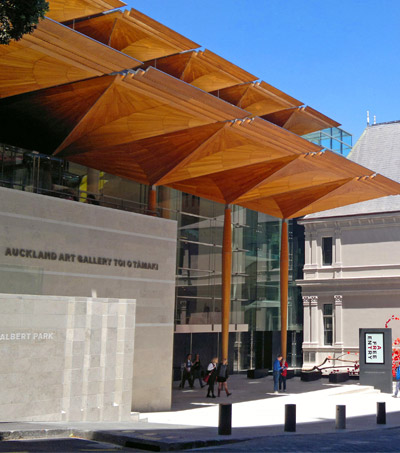 Auckland: A Multicultural Melting Pot by the Sea

“Surrounded by beaches and volcanoes, with a thriving arts scene in between, local journalist Hannah Spyksma shared her Auckland insider tips, which she describes as “the South Pacific’s melting pot” in an article in the Guardian.

In Auckland, which “lies across an isthmus straddling the Pacific Ocean on its east and the Tasman Sea on its west” you’re never far from a beach.

The best building in Auckland, according to Spyksma, is not the Sky Tower, which gives this city its distinct skyline, but the Auckland Art Gallery backing on to Albert Park.

“With its remodelled main atrium opening in 2011, the building – and particularly its ceiling – is a refined example of architecture that pays homage to New Zealand materials. The stunning Kauri wood ceiling consists of 28 pods, towering 15 metres above the entrance. The intricate detail and local craftsmanship are impressive, and the council-owned organisation has picked up numerous awards,” she writes.

Her most under-rated Auckland location is K Road – “the notoriously bohemian street is known as the red-light district, the gay district and generally the welcoming, all embracing home of the artists, the cultured and the misfits.” Now the street is changing and “becoming a modern foodie destination, spearheaded by the growing influence of local favourites like bistro Cocos Cantina.”

She also references the “post-graffiti movement that has really taken off in Auckland in the last few years, with street art following the global trend of rising beyond the backstreets and train carriages, to the front pages of society as a medium for socially conscious messaging.”

Coming back from overseas Spyksma noticed how “being hit with the smell of sea was literally like a breath of fresh air,” compared to Northern European cities she had lived in, “where cities often have the stale smell of cigarettes hanging in the air.”

Spyksma urges visitors to “treat Auckland as more than just a layover destination for New Zealand’s picturesque South Island. With its magnificent harbours, beaches, islands and regional parks the city is a destination in its own right.”

“While New Zealand as a nation has a bi-cultural framework, there’s no denying that Auckland is multicultural. It is the biggest Polynesian city in the world and is home to two thirds of the country’s Pacific and Asian identifying populations. This, combined with its Māori and Pākeha (white) heritage, means that Auckland is a South Pacific melting pot like no other,” she writes.