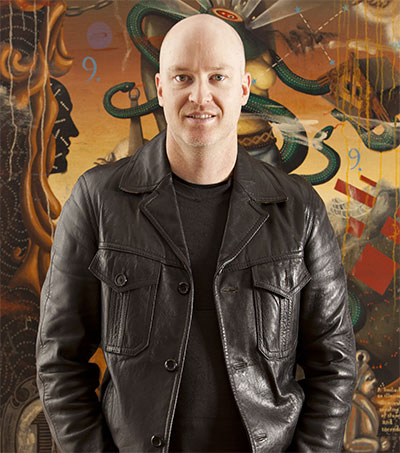 In Matthew Couper’s exhibition, From Dust to Water, the New Zealand-born Las Vegas-based artist uses the language of symbols – skeletons and cacti, blenders and playing cards – to combine pictorial elements in witty and incisive visual narratives.

The Nevada Appeal previews the show, which is on at the Nevada Arts Council’s OXS Gallery in Carson City until 13 July.

Social commentary is the emphasis in Couper’s works, and he often uses Las Vegas iconography to get there, but these artworks aren’t just about the Valley. Their surreal content addresses bizarre phenomena in an increasingly post-humanist, globalised culture.

This artwork was created between 2011 and 2017 and includes paintings influenced by Spanish Colonial art. The scale ranges from miniatures to large-format pieces, mainly oil on canvas, metal and paper, along with wood block prints, mixed media works and lithographs.

Couper’s unique background – a New Zealander by birth, a Las Vegan by choice – has contributed to the complex, hybrid nature of his imagery.

“I’m starting from scratch, but knowing that I need to assimilate socially and culturally while retaining a sense of where I came from,” Couper said.