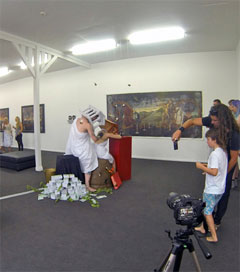 Isolated Gisborne Gallery Has a Different Set of Rules

Two exhibitions by New Zealand-born artists based overseas are opening at PAULNACHE in Gisborne. Matthew Couper, who lives in Las Vegas and Matt Arbuckle, who has spent the last couple of years in Berlin, will show their latest works at the contemporary gallery through 25 January.

“PAULNACHE is renowned for offering something beyond the traditional, sedate, gallery experience,” artist and curator JK Russ writes for the Huffington Post.

“The freedom to experiment has allowed PAULNACHE to break the mould in a number of ways. In 2012, Couper represented the gallery at the Auckland Art Fair and his popular live ‘painting monkey’ was the first time a dedicated performance art event had featured at the Fair.

“[Director] Matt Nache sees the white wall gallery space as going through an evolution. ‘Dealers need to become a lot more mobile. It’s about being spontaneous and accessible.’

“Building on this philosophy, PAULNACHE will be participating at the Melbourne Art Fair in 2014 and is also building strong links between Gisborne, Europe, India, the Philippines and the United States.”