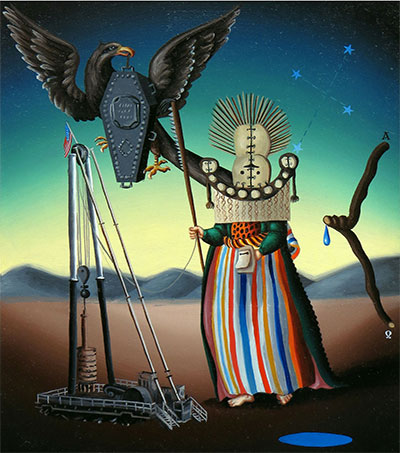 Hastings-born artist Matthew Couper’s From Dust to Water, at Rise gallery, Holsum Lofts in Las Vegas, and on until 30 November, “is a beautiful, strange and disarming show that does something rare in fine art today: It delivers a message,” according to Las Vegas Weekly reviewer Dawn-Michelle Baude.

“Social commentary is Couper’s endgame, and he often uses Las Vegas iconography to get there, but these artworks aren’t just about the Valley. Their bizarre, surreal content addresses bizarre, surreal phenomena in our increasingly post-humanist, globalised culture.

“From Dust to Water includes 50 paintings influenced by Spanish Colonial art and created between 2011 and 2017. Couper – a New Zealander by birth, a Las Vegan by choice – frequently exhibits internationally, but he has never surveyed his work made about Las Vegas in Las Vegas. The scale ranges from miniatures to large-format pieces, mainly oil on canvas, metal and paper, along with wood block prints, mixed media works and lithographs.

“From Dust to Water is a vivid reminder that Couper is an expert, and learned, painter in full possession of his powers. He follows David Hickey and Jean Baudrillard in recognising that Las Vegas is, in many ways, ahead of the curve. Our water crisis isn’t just ours; it’s everybody’s.”