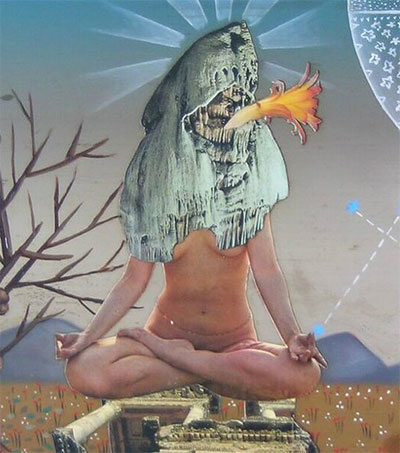 In addition to the joint works, Couper exhibits nine new paintings and seven collages by his wife, JK Russ.

“When husbands and wives work together things can often go horribly awry,” according to Houston Press reviewer Susie Tommaney, “but their combined works are actually quite successful, most notably in the four-panel poliptych AM PM. The heroine of 1 Designer Deadhead is a topless female with an alligator skull for a head, seven skyward-turning ghosts and the familiar theme of serpent and apple. As the narrative unfolds, 2 Mid-Morning Meditation shows a belly-chained woman in the lotus position atop toppled columns. A nude female is body painted in the style of ‘60s Pop Art with a cactus for her head in 3 Afternoon Peaker; and the story is put to bed with candles, cobwebs and a bee hive in 4 Evening Engager.

“Couper is a prolific painter and, with his paintings laden with symbolism, there is much to divine.”

“The largest solo piece by JK Russ, The Gift, is futuristic with its red-orange Martian landscape and constellation arc. Proximity reveals all the trappings of commerce and fashion, with gold jewellery and artifacts, and the creation of collaged characters with gold nugget bodies, and rings and Fabergé eggs for heads.”