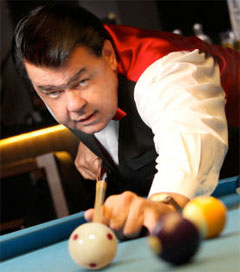 Professional pool player Macau-based Rocky Lane has broken his own jump-shooting world record time, potting 15 pool balls from the table in 11.29 seconds. New Zealand-born Lane is newly invited as coach for the Macau Billiard Association (MBA) to raise young players and also to improve the game of pool locally. After being in the game since the 1970s, Lane said he hoped to cultivate more young people to play pool. “It is much easier, actually, pool is taking off in Macau now,” Lane says. In 2005, his record of jump shooting and potting 15 pool balls from the table in 14.16 seconds was shown on CNN.