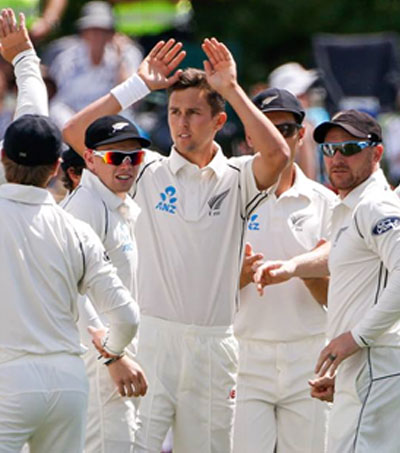 The Black Caps won their second test match against the Sri Lankan side yesterday, completing a 2-0 series sweep at the Basin Reserve in Wellington.

The winning start to the years continues what was the team’s best ever year in 2014.

After conceding a significant first innings deficit the Black Caps bounced back with a huge second innings led by a world record 6th wicket partnership between BJ Watling and Kane Williamson. The partnership passed the previous record set by Watling and Brendon McCullum at the same ground last February – an achievement that had commemorated in a bronze plaque at the ground just days ago.

The batting heroics were well supported by offspinner Mark Craig whose four-wicket haul ensured victory on the final day. Doug Bracewell and Trent Boult each also contributed two wickets on the final day.

The win sees New Zealand pass Sri Lanka and India to reach fifth on the International Cricket Council’s Test Rankings for the first time since 2006.