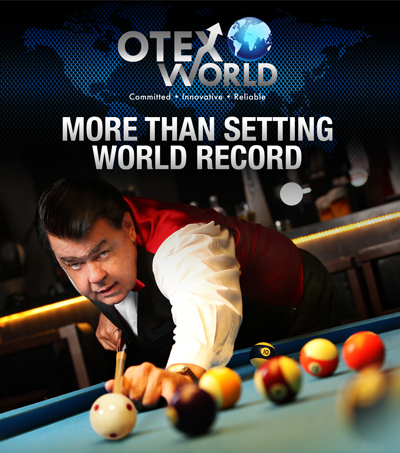 New Zealander and professional pool player Rocky Lane, the all-time Fastest American Pool Speed Jump Shooter in the world, has been signed by OTEX World Corporation as their title sponsor. The sponsorship will support Lane’s effort in promoting the game of American Pool in Macau and abroad.

The New Zealander, who is known as “Machine Gun Rock,” renewed his own World Record of speed jump shooting and potting 15 pool balls from the table within 14.16 seconds in 2005. In 2013 he returned to Macau to break his own record, reducing it down to 11.29 seconds.

“He not only potted 15 balls at speed but also shot them between two filled champagne classes with pin point accuracy, on his very first attempt, without any practice run.”

Rocky Lane was born in Suva, Fiji. His family migrated to New Zealand to the farming community of Hot Water Beach, Whitianga, where his father was a sharemilker. Rocky was introduced to the game of pool by his former father in law, the late Norm Stockman, 1972 New Zealand Snooker Champion. In 1976 Rocky became New Zealand 8-Ball National Champion.

The Kiwi wasn’t always a professional pool player – he claims “action packed life” having served in the military, police, undertaken legal studies, and acted as inhouse counsel for financial companies and an immigration consultant.

In the mid-90s American Pool as a sport began to take off in New Zealand and in 2006 Lane officially turned professional, playing and winning on European, American and Asian circuits..

Having retired from the world circuit, he focuses his attention towards coaching and was invited to a coaching position with the Macau Cue Sports Body – The Macau National Billiards Association. His motto is “less talking and more chalking.”