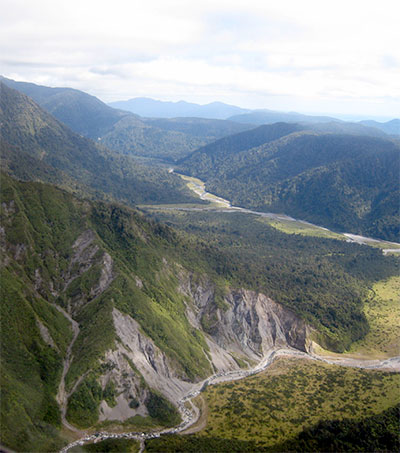 An international team of scientists drilling a 1.3-km deep hole into the Alpine Fault in the South Island say they are already gaining valuable insights into the earth’s crust less than a quarter of the way down.

The New Zealand-led team has so far drilled 240m, already the deepest borehole ever attempted in the fault, through gravel-laden sediments north of the Franz Josef Glacier and hit schist bedrock.

“We have discovered that temperatures increase quite rapidly with depth, which tells us a lot about how fluids that once fell on the Southern Alps as rain circulate and warm up next to the Alpine Fault,” project co-leader Virginia Toy of the University of Otago said.

The Alpine Fault, the on-land boundary between the Pacific and Australian tectonic plates, moved about 27m horizontally every 1000 years, in three or four separate large ruptures.

The fault last ruptured 297 years ago in 1717 and scientists estimated it had a 28 per cent probability of rupturing in the next 50 years, which was high by global standards.

Scientists and engineers from New Zealand, the US, Britain, Germany, Canada, France, Italy, Japan, Australia and China are working on the project.