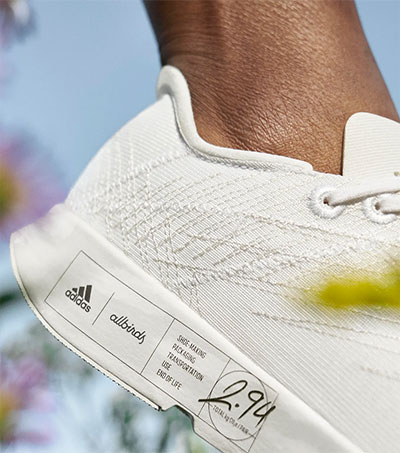 “The Futurecraft.Footprint is a running shoe built to perform just like any other, but with a cradle-to-grave carbon footprint unlike anything that’s gone before – less than 3kg per pair. That’s roughly the equivalent of seven miles driven in the average car.

“When you consider that the average pair of running shoes costs as much as four times that – anywhere between 12.5 and 13.6kg of carbon dioxide – it’s an impressive achievement,” Alger writes.

“In essence, the collaboration creates a catalytic mix: adidas’s vast experience of creating performance running shoes and mass production, combined with Allbirds much deeper knowledge of complex carbon footprint and Life Cycle Assessments (LCA) and the use of natural materials. Not to mention its certified B Corp status adding some environmental credibility to the mix.”

Allbirds was co-founded in 2015 by New Zealander Tim Brown and American Joey Zwillinger.