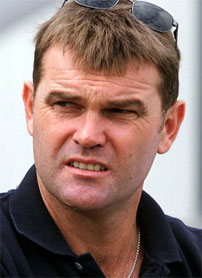 “In what is probably a bit of mid-life crisis I have come up with a solution — trying to get fit and up to speed to play a competitive game of cricket again,” former New Zealand cricket captain Martin Crowe has said about his ultimate aim of playing first class cricket at the age of 49. Henderson-born Crowe, who made his first class debut as a 17-year-old in 1979, said he is to play for the Cornwall Cricket Club in Auckland with the aim of earning a recall to the Auckland side for the Plunket Shield competition. “I have had a lot of text messages with just one word ‘why’,” Crowe, who turns 49 on September 22, told TVNZ’s One News. Crowe, widely considered one of the best batsmen produced by New Zealand, scored 5444 test runs with 17 centuries at an average of 45.36. He retired in 1996.