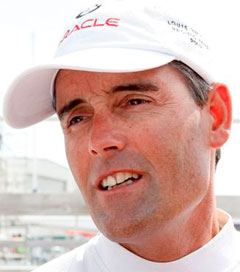 Adding Traction to the America’s Cup

“After a storied career at sea, where Russell Coutts ranked among the most successful skippers in Cup history, the New Zealander now serves as chief executive for the Oracle racing team,” Los Angeles Times’ correspondent David Wharton writes. “With a mandate from owner and tech billionaire Larry Ellison, he is guiding an effort to reinvent sailing for an X Games generation.”

“It works like this: As defending champ, Oracle got to decide the site for the next race and the type of boats. So the 2013 America’s Cup shifted from open sea to the San Francisco Bay, where spectators can watch from shore.

“Gone are the conventional monohulled yachts, replaced by sleek catamarans with rigid sails that look like a jet wing. These AC72s can reach unprecedented speeds, rising out of the water to skim along on hydrofoils.

“Coutts insists the Cup had no choice but to change.

“‘Ask the younger generation,’ he said. ‘That’s probably what matters – we ought to consider what the young people want, what they think is cool.’

“With the challenger finals scheduled to commence 10 August, Oracle can tinker some more with its boat. And the America’s Cup can hope for some desperately needed traction.

“‘It’s going to take a while before the concept reaches its potential,’ Coutts said. ‘Let’s see how it plays out.’”

Coutts, 51, was born in Wellington. He was named CEO and skipper of BMW Oracle Racing in 2007.